The “Robat” is a fully autonomous terrestrial robot with bat-like qualities that uses echolocation to move through novel environments while mapping them based only on sound. It was developed at Tel Aviv University. Bats use echolocation to map novel environments, navigating them by emitting sound then extracting information from the echoes reflected by objects in their surroundings. Many theories have been proposed to explain how bats harness sonar in order to navigate, but few attempts have been made to build a robot that mimics a bat’s abilities. A TAU study about the invention was published today in PLOS Computational Biology. TAU graduate student Itamar Eliakim developed a robot that uses a biological bat-like approach, emitting sound and analyzing the returning echoes to generate a map of space. Prof. Yossi Yovel of TAU’s Department of Zoology and Dr. Gabor Kosa of TAU’s School of Mechanical Engineering serve as Mr. Eliakim’s advisors. 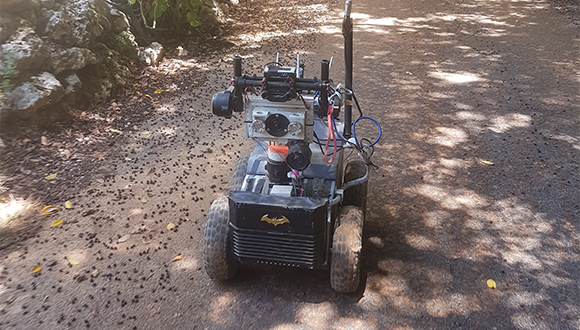 The “robobat” in action (photo: Etamar Eliakim) “Our Robat is the first fully autonomous, bat-like biorobot that moves through a novel environment while mapping it solely based on echo information. This information delineates the borders of objects and the free paths between them,” says Eliakim. “We’ve been able to demonstrate the great potential of using sound in future robotic applications.” 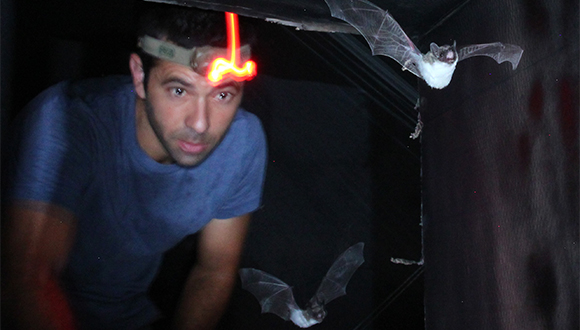 Prof. Yossi Yovel using a sonar to communicate with bats The Robat is equipped with an ultrasonic speaker that produces frequency-modulated chirps at a rate typically used by bats, as well as two ultrasonic microphones that serve as the robot’s ears. It classifies the borders and shapes of the objects it encounters with an artificial neural network, creating a rich, accurate map of its environment while avoiding obstacles. For example, when reaching a dead end, the robot uses its classification abilities to determine whether it is blocked by a wall or by a plant through which it could pass. Watch a video about the science behind “robotbat” >> featured image:  Jans Raidel