When Shakespeare came to Tel Aviv

Did Shakespeare ever imagine that his plays would one day be translated to Hebrew? Or staged at a public park in Jerusalem? And is his work even relevant today, for a modern Israeli audience? For Shakespeare’s 435th birthday we decided to check in with TAU’s Department of Theater Arts to find out.

Third-year student Natan Skop was born and raised in New York City, considered one of the global capitals of theater. But for several years before enrolling at TAU, Natan staged Shakespearean plays in Israel, of all places, at a public park in Jerusalem. Curiously, he’s found there’s a particular advantage to staging the bard’s work here in the Middle East.

“Growing up in New York, Shakespeare seemed to be everywhere,” Natan says. “There was a lot of different styles and flavors of presentations to choose from. In Israel, Shakespeare is obviously extremely well known and a classic part of contemporary repertoire, but there isn’t quite the intensity of work being put on.

“When we started putting on productions outside in the park, we had this huge following almost instantly because there wasn’t really anyone to compete with in that niche. So I think the main difference is the saturation.” 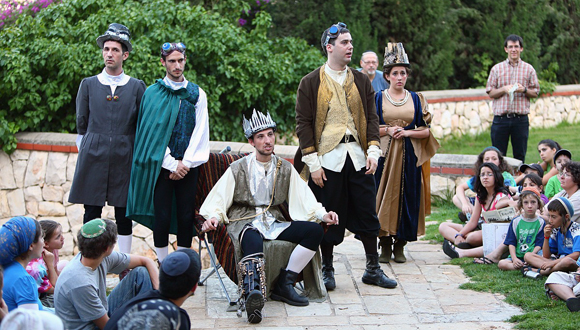 Shakespearean language is notoriously difficult to understand for a modern audience, especially if English is your second language. Do Shakespeare’s works, set hundreds of years ago and on a different continent, have relevance for ordinary Israelis?

“I think the main surprise was to find out how much people connected to the outside shows in Jerusalem,” Natan says. “All ages, all languages, all backgrounds, it really becomes this community event. Culturally, it’s fascinating and often unexpected how different parts of the plays stand out in a different social context, both in study and in performance.”

Currently Natan is staging a scene from the play “Titus Andronicus”, which he feels speaks particularly well to Israeli politics and social reality.

“I think “Titus Andronicus” communicates so clearly with a lot of the popular media today, and especially with our fascination as a society in images of murder and violence. This last is really relevant to modern-day Israel, with all too many moments of violence and death in public discourse.”

From Romeo & Juliet to Ram & Yael

Natan is of course far from the first to consider Shakespeare relevant for the local reality. In fact the first translations of Shakespeare’s work into Hebrew was done in the 1870s by Isaac Edward Salkinsohn, who translated the play “Romeo and Juliet” as “Ram ve Yael”, using Biblical Hebrew names in place of Shakespeare’s Italian ones.

Even the play “The Merchant of Venice”, which is considered by some to have antisemitic overtones, has been staged multiple times in Israel. According to Prof. Liora Yellin, from the Department of Theater Arts, a production of the Merchant of Venice was even staged here in Israel, during the British mandate, in 1936. In response, there was a “literary trial” of Shylock, including an “indictment” against the theater for promoting antisemitism. (Shakespeare would no doubt be delighted to know that newspapers from the era reported the perpetrators were cleared of all charges.)

So what is it about Shakespeare that makes his work so universal and timeless? It seems to cross all boundaries of culture and language. According to Prof. Yallin Shakespeare is “always relevant, because every generation reads his plays and tries to find ‘their own Shakespeare’ in the complex tapestry of his works.” Natan and his outdoor audience would probably agree.